My Experience as a Woman Traveling Solo in Morocco

There was a line, and I was about to cross it. Maybe it wasn’t a line, more of a fence, but it wrapped around Western Europe. This was the comfort zone I had slowly built with my parents where they wouldn’t completely panic if I was traveling alone. But I had explored most of Western Europe. My heart wanted more! My heart wanted the world, the whole world. My was heart wasn’t taking “no” for an answer. And so  I booked my flight to Morocco.

I looked up solo female travel in Morocco. A blog mentioned that the experience was challenging, and that she even had a rock thrown at her for not responding to a catcall. I was nervous, and I considered hiring a guide to show me around and keep me safe. I read other blogs saying the experience was uncomfortable. I spoke to women who went on organized trips and they said it was fine, but that the Medina was confusing and there was a need to be respectful, fully clothed and covered.

Fast forward to Marrakesh, Morocco. I invited a classmate along when she expressed interest in the trip. We were together during our time in Edinburgh, Scotland, for the layover in Barcelona, and our time in Marrakesh.  But then I was going to be on my own in Fez and Chefchaouen.

In Marrakesh, we had a hostel in the Medina, but my classmate was uncomfortable there, so we switched to a Riad around the corner with our own private room. The Medina streets were bustling with people, motorcycles going way too fast down the narrow alleyways, donkeys pulling wagons of people and goods, and tons of cats. It was something. We came back late from a restaurant, got followed by a man that quietly spoke French over my shoulder. After a few streets he walked away. Somehow it wasn’t intimidating. He seemed more interested than threatening towards us.

I went out by myself the first day while my classmate slept in.  I put on my sunglasses and walked around the Medina and square. I was mostly asked to look in the shops. I heard all around me, “Excuse me!” “Sorry!?” “UK?” “Come look at this!” “Please miss come look!” “Beautiful!” And I didn’t want to be bothered so I pretended not to understand, not to hear, and kept walking. I felt more and more confident with every step. I felt like a superstar dealing with the paparazzi to be honest.

I felt uneasy bartering, with so many living in poverty, myself a tourist. I decided to wait until my friend woke up to try it. A woman came up to me while I was out by myself. She complimented me, asked if I wanted henna. I was unsure if it was considered cultural appropriation, and since I was on the fence, it was a no for me. Ethical travel is very important to myself. I tried to wave her away, but she grabbed my hand and said, “It’s for goodluck!” She went to town, had half my hand in henna before I realized what was going on. In the end she got me to sit down and finished. After two minutes it was done… and she tried to charge me $90. I learned how to barter right then and there, got her down to $45, still ridiculous, but oh well. It was beautiful henna. 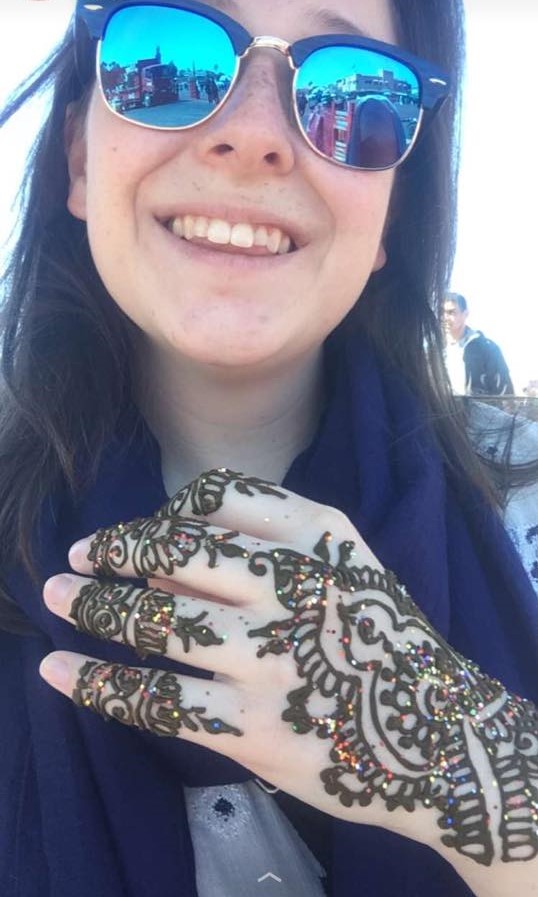 At night my classmate and I went to a pizza shop and on the way there, the same comments, trying to get our attention. A man even grabbed my arm and said, “BUT I LOVE YOU!” Sometimes, back in Boston, I can be very sensitive to catcalling and I find it upsetting. But here, in Morocco? I felt safe for some odd reason. I’ve lived in a not-great area of Boston for a while and people were drunk, catcalling, hollering at me, falling on me during all hours of the day. I couldn’t go out at night by myself because there were always crimes being reported. But in Morocco? It’s a Muslim country, so people aren’t drinking, and the words and actions didn’t seem threatening. The customs are aggressive at surface level, but the men all seemed genuinely kind and held compassion as a core value. Plus, I forgot Israel was the same way with the aggressive shopkeepers so it wasn’t my first time experiencing it. That being said, I understand why some say you shouldn’t travel alone. However, I felt comfortable and was ready to go completely solo when it was my time to go to Fez.

The first hostel in Fez, Medina Social Club, was vibrant and amazing. I was in a mixed-gender dorm, and had dinner with a French young man. The next day I left for Chefchaouen. By the way, I found I bought the tickets through this blog site linked here and they were legit, so I suggest that, since the CTM site is hard to navigate and you have to buy the tickets in advance.  I took the bus at 8am the next day, and it was four hours from Fez to Chefchaouen. It was raining in Chefchaouen, and it was stunningly beautiful. The taxis are safe, but you’ll have to pay someone to you to your door if it’s in the Medina. That’ll usually be around $10 USD (100 Durham).  Taxis are cheap though, just make sure you check the price before you get it, maybe negotiate it down.

Majority of my solo time was spent in Chefchaouen. Marrakesh is always bustling, a tourist city. They say you either like Marrakesh or Fez, not both. I loved Fez. For the short time I was there I could see it was slower. I felt like the Moroccan charm was revealing itself more to me. People were less aggressive with trying to sell things.

Chefchaouen truly was the Blue Pearl, a hidden treasure. It was there that I was able to breathe. I felt rejuvenated, comfortable, calm. I didn’t realize how much I needed it. The city really is all blue. It’s stunning. And the locals are all very relaxed, not pushy at all, laid-back. I got lunch somewhere and I asked for couscous. They didn’t have it, but said they’d make it tomorrow for me. I ordered the white bean soup it was so yummy. The next day I walked in and they instantly gave me the vegan couscous. 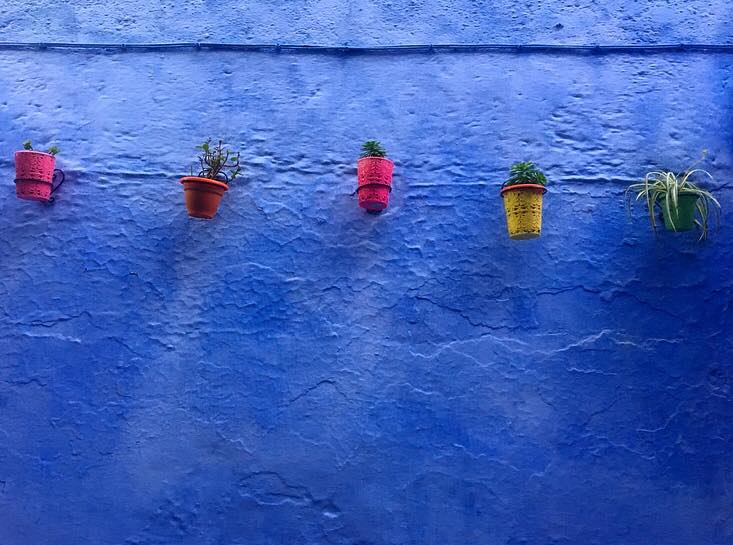 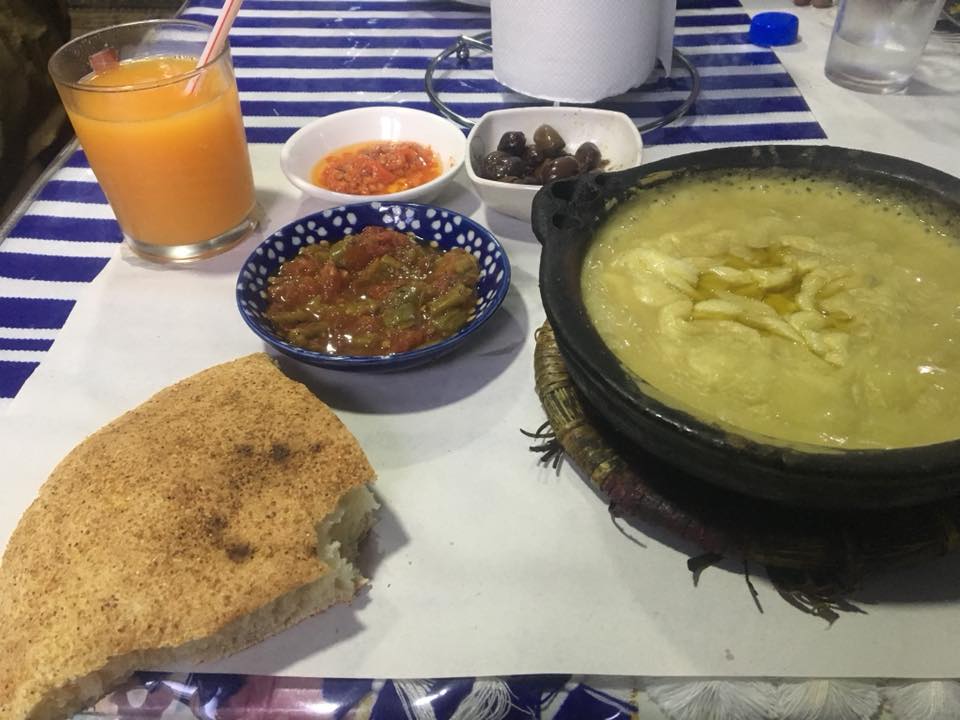 I spoke with the Chefchaouen locals over lunch and dinner. They always said, “Welcome!” “Welcome!” There was such pride in the country. At the hostel, Dar Dadicilef,  Abdul, the manager and main staff, was so kind. He lit a fire at night so we could be nice and cozy in the common area. Breakfast was scrumptious, breads, jams, and of course fresh orange juice and mint tea. For non-vegans there’s a cheese spread, butter, and honey too.

I took a taxi with other travelers from the hostel back to the bus stop, and then went back to Fez. I met other travelers at the bus stop that were staying at the same hostel, Riad Verus, back in Fez. That hostel looked like a palace! You walk down these alleyways, then before you know it you’re ducking your head into some door and then you’re in an architectural mosaic masterpiece. And Riad Verus had a hostel dog, Bruno.  I spent one night there, went out the market in the morning, and then went to the airport.

My time in Morocco was amazing, and I never felt unsafe as a female solo traveler. The people there were kind, welcoming, and exceptionally hospitable. I want to go there again one day. And I want to bring my family.  So, yes, I suggest you go to Morocco. If you’re a female solo traveler, go! Listen, I’m saying as a woman, the only way to be completely “safe” and not be sexualized in this world is to not exist. And ladies, we’re already at the party. We look fantastic, and we’re going to have a blast traveling the world. As always, be aware and vigilant, and understand there are cultural differences. Be respectful and plan out your journey. Go boldly and enjoy the amazing culture of Morocco! 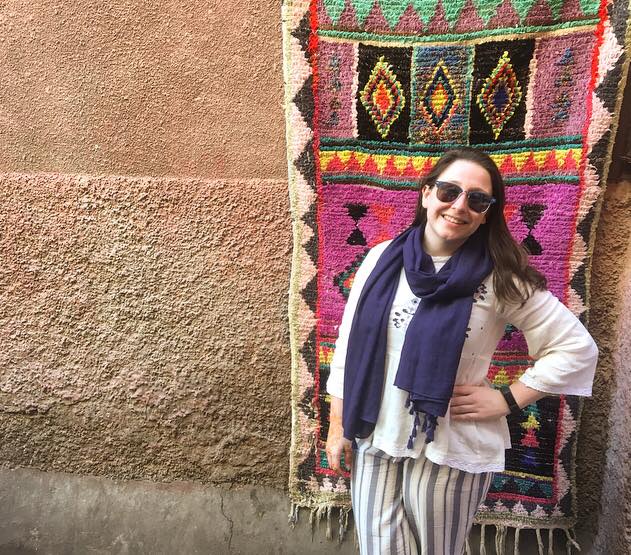 Feel free to email me if you have any questions or would like suggestions: hiddencaa@yahoo.com .

The best way for me to explain the level of hospitality I received is it is to tell the story of how I accidentally bought two carpets. That blogpost is coming soon…. ❤ Has anyone else had a solo trip to Morocco? What was your experience like? Comment below!