Breaking the Rules: Sneaking into an Abandoned Amusement Park

Sometimes you’ll be traveling and realize that the things you really wanted to do are actually off limits. Take pictures of the Sistine Chapel? Not allowed, but look around and you’ll see everyone sneaking a pic. Climb the Stairway to Heaven in Hawaii? It’s permanently closed, but that won’t stop me!

Some rules are important, like “Don’t climb or draw on the Colosseum“. That’s important and makes perfect sense. That thing is almost 2000 years old! I also strongly believe that tourists should not take pictures at memorial sites, where they specifically ask you to put the camera away. This is out of respect for the victims.

That being said, I fully planned on getting into the abandoned Spreepark. It was a “Keep out, because the town said so” sort of rule. My study abroad class had a planned trip to Berlin and a girl in the class really wanted to go to this abandoned amusement park. My friends from Russia, Ira and Anna, wanted to come along, but it wasn’t until we were almost there that I realized they didn’t understand that the amusement park wasn’t open, and hadn’t been for decades. That didn’t get across the language barrier when I asked them to come along, but they still decided to stick with us.

After going deep into the woods, we found it. Ira and Anna decided to not go in, so they walked around on the path so they wouldn’t look suspicious. There was a police car that passed by every few minutes, patrolling the area. Other than that it looked like we were by ourselves in the middle of the night. The park used to be open to the public, but there was a mysterious fire that broke out in August of 2014, a month before I went there. Usually things are closed off to the public, they mysteriously catch on fire, and then the city decides its best to tear it down. It’s happened right next to my town. There was a large vacant mill that was just there in an area that people wanted to use. So it mysteriously burnt down in an eight-alarm fire.

But Spreepark was still standing and I wanted to go in, because there may not have been another chance to embark on the adventure. I don’t know what my classmate was thinking, because she was really gung-ho until she saw the fence we had to climb. I LOVE to climb, so I just went over, cutting up my hands in the process, but it wasn’t too bad. We spent probably an hour trying to find the park and I wanted to get up close and really experience it. Eventually after much fretting and second guessing, my classmate came along. 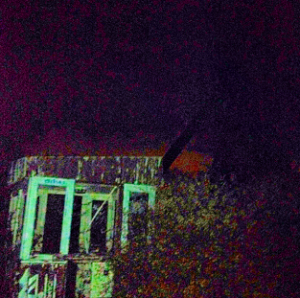 After a little bit, our eyes adjusted. I could see the ferris wheel and hear it eerily squeaking as it moved in the wind, just a few inches each time, giving it a little sway. We saw the spooky structures left standing and the swan love boats now on dry land. A cop car came by so I just crouched close to the ground. I was not going to get caught. I kept tripping over a sort of track that must have been part of a ride, but I’m so happy we went at night.

The place must have been so much fun in the 60’s when it first opened. I imagined the place being packed, and children having fun on the rides, but standing there in the darkness I also thought, “What could be lurking in the shadows over there?” This place was dark, spooky, and the squeaking of the ferris wheel had me constantly checking over my shoulder. We were silently sneaking around, and there could be other people doing the same thing. The recent fire left piles of ashes and made the place feel lonely, like the park itself was hurt.

I didn’t have the best camera, but the pictures on my iPhone came out really creepy. I get that we broke the rules and who knows what could have happened, but when it comes to cool abandoned places, just buck up and go in! I get that it’s not everyone’s cup of tea, but I think abandoned places have a dark sort of character, and I love to explore.

Cheers to the thrill seekers and rule breakers! Just don’t get caught. 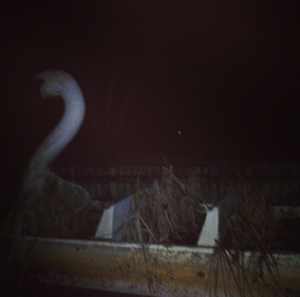 5 responses to “Breaking the Rules: Sneaking into an Abandoned Amusement Park”